Select two companies in the same industry listed on the Australian Stock Market. Your analysis will be based on the latest three years’ annual reports which include the financial statements (Balance sheet, Income statement, and Statement of cash flows) and explanatory notes of your selected companies.

a.) You will need to collect data for the latest three years for the selected companies from the financial statements and other relevant information and conduct.
b.) Horizontal analysis of the Income Statement and Cash Flow Statement.
c.) Vertical analysis of the Income Statement and Balance Sheet.
d.) Ratio analysis (using two ratios for each of the five ratio categories.
e.) Your analysis should include relevant data to help a prospective investor decide in which of the two companies to invest all his lifetime savings. An in-depth evaluation of the company’s overall outlook for the future should be included.

Buy high-quality essays & assignment writing as per particular university, high school or college for Australian student
Get A Free Quote

Analysis of Financial Statements of Commonwealth Bank and ANZ Bank

Analysis of financial statements is necessary to know the financial performance of the company. It helps investors to review the development of the company and on this basis, they make their decisions. In this report analysis of Commonwealth Bank and ANZ Bank has been conducted for the period of 2011 to 2013. Both these banks are based in Australia and are well known for their performance. Financial analysis of both these banks has been done on the basis of the relevant financial ratios to evaluate Commonwealth Bank and ANZ Bank position with respect to liquidity, solvency, profitability, Efficiency, and cash flow.

Commonwealth Bank of Australia:- Commonwealth Bank of Australia is a bank of Australia that is known for providing various banking and financial products and services to retail, business, and institutional clients in various countries. The bank provides banking products and services to different countries like Australia, New Zealand, Asia Pacific, and the United Kingdom. Different type of banking products and services provided by the bank includes transaction accounts, savings account, term deposits, credit cards, personal and home loans financial planning services; superannuation products, products for youth and students, home, car, life, loan and credit card protection, income protection, and insurance products; and international and online banking services. The company is also known for providing business banking products, such as business accounts and credit cards; merchant services; business loans, overdrafts to its customers. In addition to this, the company also provides products and services in order to assist the corporate and institutional clients in managing the cash flow and liquidity.

Australia & New Zealand Banking Group Limited:- Australia & New Zealand Banking Group Limited is known to provide different banking and financial products to its personal customers. Presently the bank had 1,273 branches and is known to provide the best class of financial products and services to its customers. The company is involved in the credit analysis, structuring, execution, and ongoing monitoring of customers. The Banking Group Limited was founded in 1835 and is based in Melbourne, Australia. The customers of the bank are respectively retail, small business, corporate, and institutional customers in Australia, New Zealand, the Asia Pacific region, the Middle East, Europe, and the United States. Moreover, the company also offers motor vehicle and equipment finance, and investment products, regional business banking services to personal customers. Further, the company provides working capital solutions comprising deposit products, cash transaction banking management, trade finance, international payments, and clearing services; and risk management services to its customers.

Horizontal analysis of the cash flow statement shows the percentage change in various activities in respect of the current year on comparing it with the previous year. Horizontal analysis of financial statements is very necessary to know the amount of change achieved by companies in current as compared to the previous year (Drake & Fabozzi, 2012). On the basis of this change performance of the company can be measured easily. On analyzing the cash flow statement of both the banks using horizontal analysis it can be said that ANZ Bank has a better cash position as compare to Commonwealth Bank. On looking at the change in cash and cash equivalent it is clear that ANZ Bank has suffered less negative change as compare to Commonwealth Bank. However operating activity shows the better position of Commonwealth Bank as compare to ANZ Bank (Refer Appendix 2). 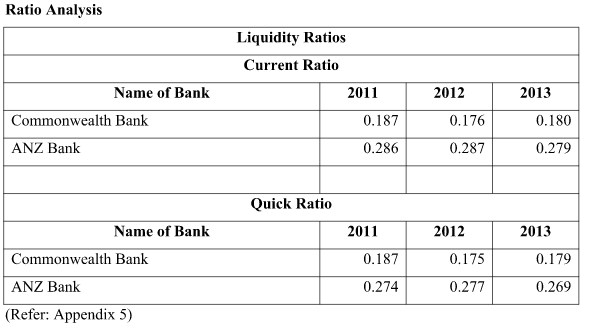 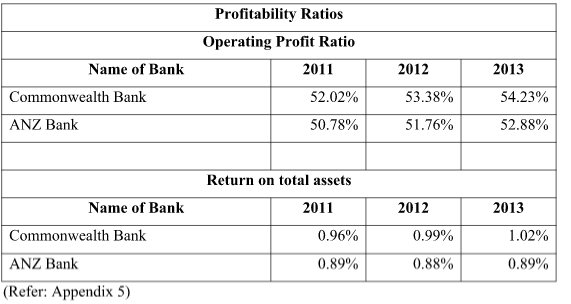 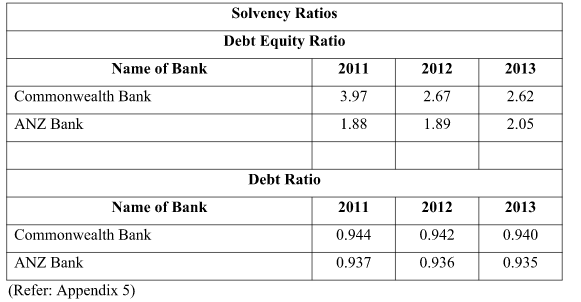 Interpretation/Recommendation based on analysis of results

On the basis of the above financial analysis and other major factors, it is advised to the investors that they must invest their future investment funds in ANZ bank despite Commonwealth bank. This can be said because the liquidity position of Commonwealth bank was not sound and this bank has taken a great amount of outside loan against its available assets. It is clearly seen from the figures of the current ratio that Commonwealth Bank does not maintain current assets of 0.180 on the total current liabilities, which indicates that the bank can face a shortage of funds to finance its day-to-day activities.

On analyzing the profitability position of both the banks it can be said that both the banks earn the same level of profit in all the last three years. Operating profit ratios show that the Commonwealth Bank and ANZ Bank have earned an average operating profit margin of 50% to 54% in the years 2011 to 2013. The return of total assets of both the Banks is below one percent that indicates that banks maintain a high level of assets to earn such a small profit. This indicates that the profitability position of both of these banks was not sufficient to pay high returns to the investors. However, it can be said that ANZ Bank maintains a good level of return to investors despite low returns. Therefore, it is advised to the investors to invest in ANZ Bank to receive a high amount of return on their investment.

Buy high-quality essays & assignment writing as per particular university, high school or college for Australian student
Get A Free Quote

On analyzing the solvency position of the banks it can be said that Commonwealth Bank uses more debt finance as compare to ANZ Bank. In the Year 2013 debt-equity ratio of Commonwealth Bank was 2.62 as compared to the ratio of 2.05 of ANZ Bank. It is highly advised to investors must invest in ANZ Bank to safeguard their funds against the debt risk.
Cash flow ratios indicate that ANZ Bank maintains more free flow cash as compare to Commonwealth Bank. The ratio of free cash flow to sales of ANZ Bank was 1.59 as compared to 0.80 Commonwealth Bank in the year 2011. In the Year 2013 it has been changed to 0.56 for ANZ Bank and 0.32 for Commonwealth. All these ratios indicate that investors must invest in ANZ Bank for the maximum amount of return on their invested funds.
On the basis of the above analysis as well interpretation of ratios it is highly recommended to investors to invest only in ANZ Bank in future years in order to receive the high returns with no risk or very little risk.

Critical evaluation of the limitations of financial statement analysis 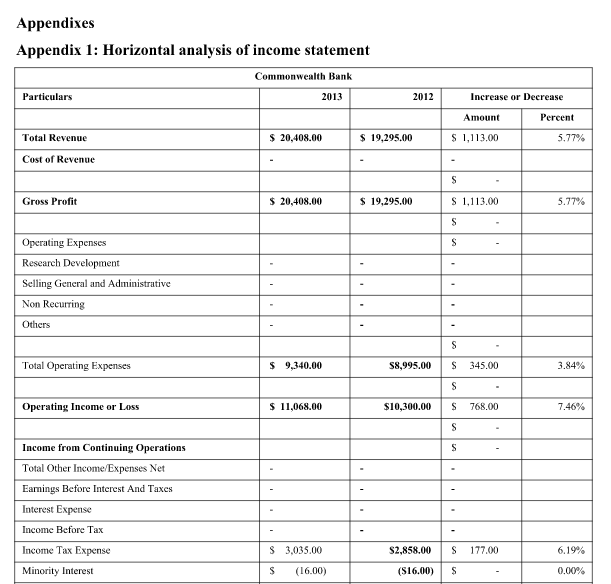 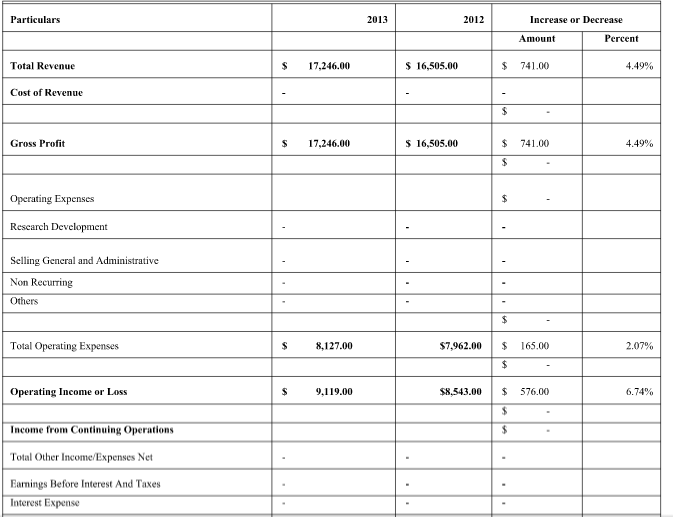 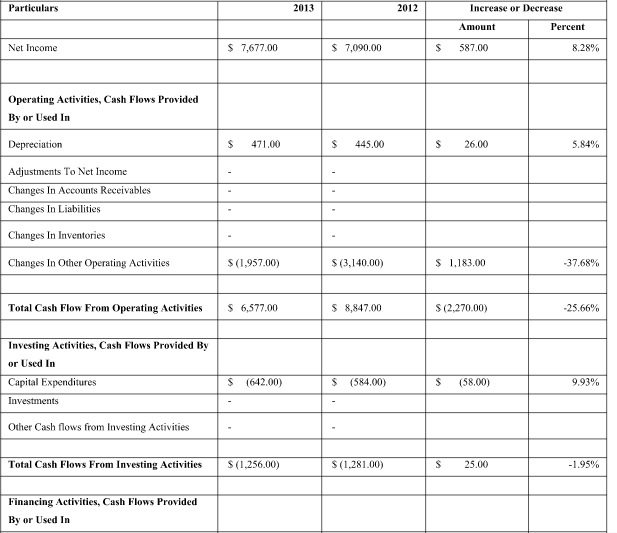 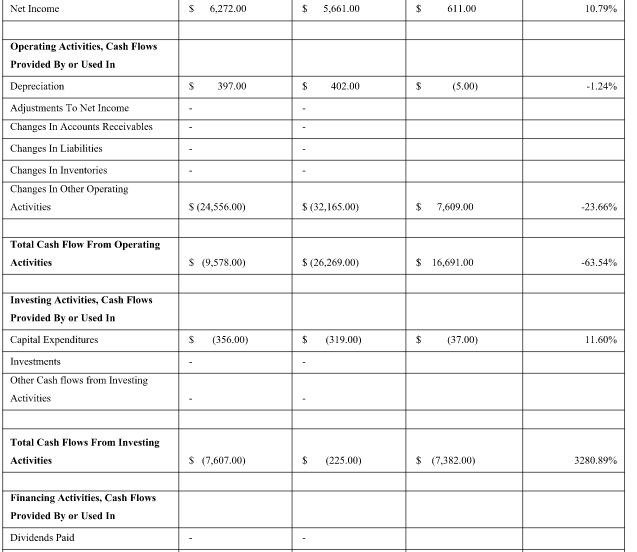 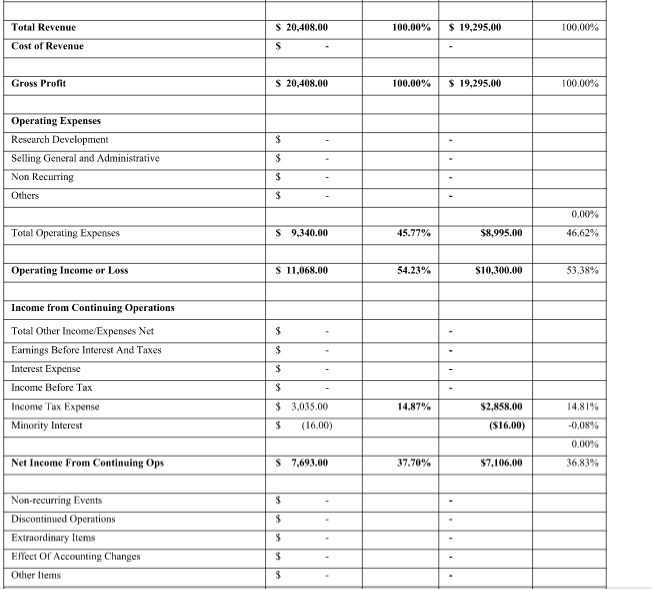 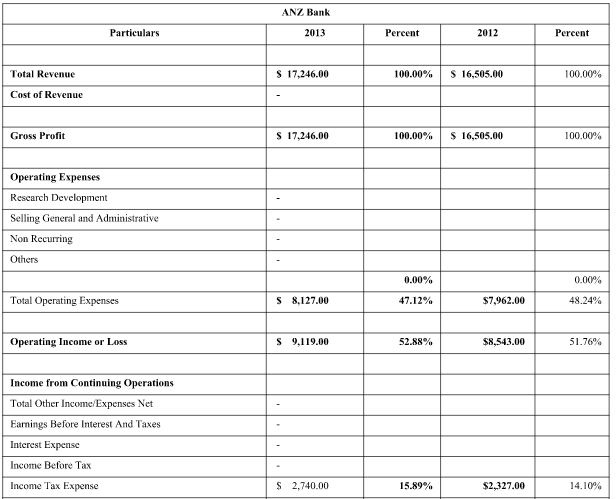 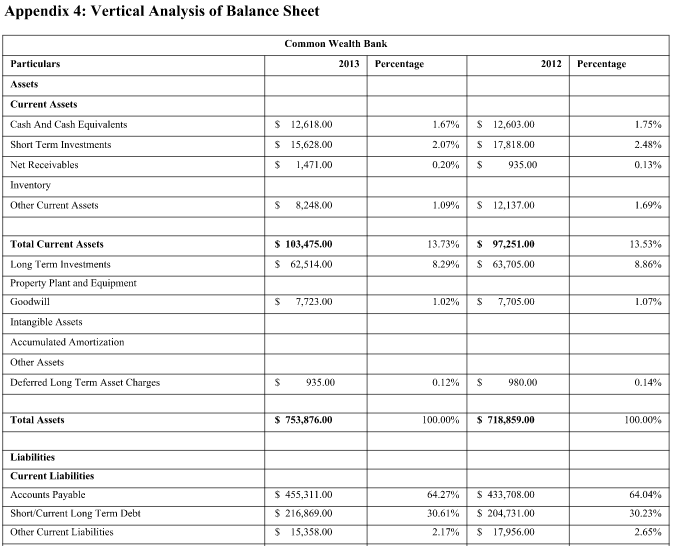 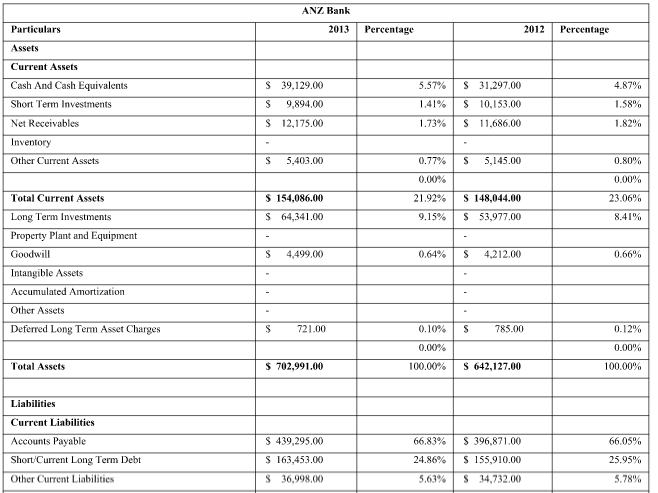 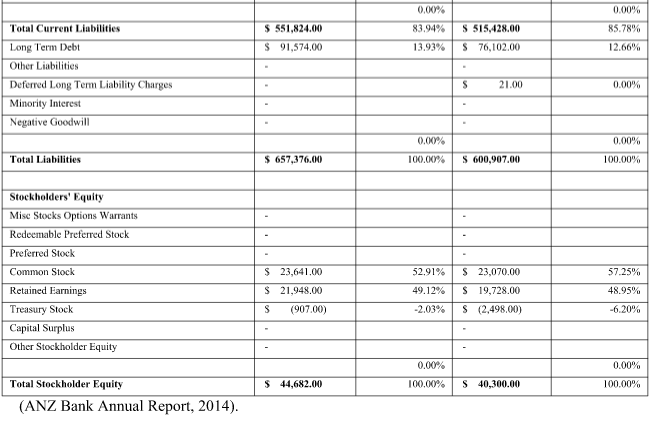 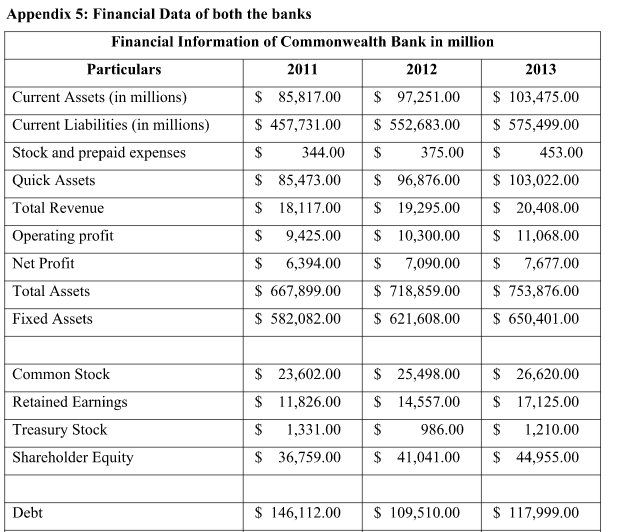 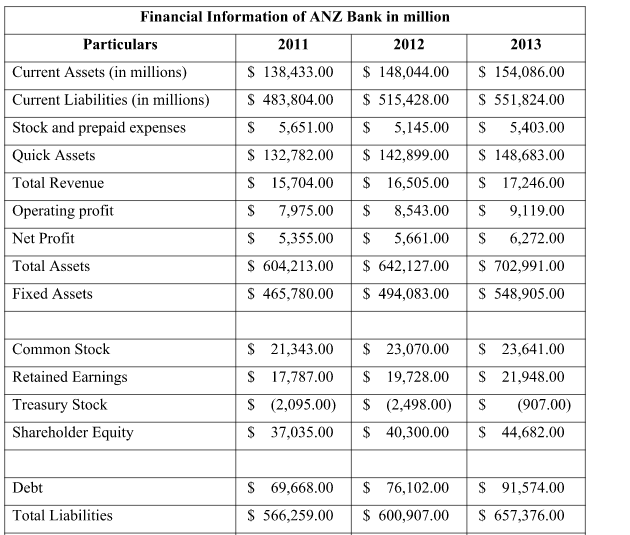 If you are looking for assignment help in Financial Statements Analysis of Commonwealth Bank and ANZ Bank in Australia, we at Australia Assignment Help can make it easy to get the best grades. We provide affordable assignment writing services because of our experienced writers who have been in this industry for many years and know how to tackle any type of assignment help or essay writing help that is given by your professor.

We have a team of writers from all over the world with expertise in different areas. All our writers go through a process where we verify their skills and choose them based on the subject they are good at. The best part is that you get to work with different writers, which gives you a variety of options when it comes to writing your paper.

Yours all information is private and confidential; it is not shared with any other party. So, no one will know that you have taken help for your Academic paper from us.

Get Free Offers on Your Assignment